“Rules of the Game” 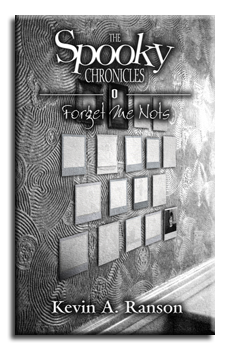 After the pizza was gone and the luggage was stowed, the fifth graders all met back out in the foyer below the balcony. Shortly before nine o’clock, the lights dimmed and everyone grew quiet.

The solitary sound of an electric motor accompanied the image of a man in a wheelchair appearing at the top of the grand staircase. It was hard to see all the way up there, even if the lights hadn’t been dimmed. As if on cue, a flash of lightning through the balcony windows was quickly accompanied by a loud thunderclap, rattling the walls and the chandelier overhead.

“Welcome, children, to my home.”

The voice seemed to come from everywhere, but they had obviously been spoken by the man in the wheelchair. The rain outside could be heard pelting the roof and windows.

“My name is William Chesterfield. My grandfather built this mansion when he was a young man, and my father added to it when it became his. Now it is mine, and you are all my guests.”

Mr. Chesterfield paused for effect. The way he said “guests” sounded more like “prisoners,” and the effect wasn’t lost on the group. In Spooky’s mind, it was all perfectly awesome.

“So,” the man in the wheelchair continued, “have you all come for my hospitality, or have you come,” he paused again for effect, then finished with, “for the candy?”

The gleeful emphasis on the word “candy” shattered the sinister spell, causing many of the other kids to predictably cheer. Spooky rolled his eyes; they could have the candy as long as he got to see the rest of the mansion.

“There are rules!” Mr. Chesterfield continued as the murmuring died down. “There are thirteen areas throughout my home, each with a clue to where you may find one of thirteen skeleton keys. The keys all look a bit different, so look at the picture on the clue card before you search. If any doors, cabinets, or drawers are locked, they are off-limits; the keys will be where you can find them and within your reach. If you are confused, get lost, or need help, don’t be afraid to ask one of my minions.”

It was at this time that Spooky noticed that the wait staff had taken the opportunity to slip out of the room. Like the others, he’d been so engrossed with listening that he wasn’t paying attention to when they left. That left the obvious question, but someone else asked it before Spooky did.

The simultaneous sound of a large group taking a single step together echoed throughout the foyer. In time with the sound, over a dozen people in dark, ritualistic robes appeared on the balcony landing next to Mr. Chesterfield. Only the hands and the lower halves of the faces of each minion could be seen, giving them a cold, inhuman appearance.

“These minions,” Mr. Chesterfield answered. “The hunt will take place from nine until midnight. At that time, all children must return to the North hall to claim their prizes. Finally, one of the thirteen keys will open a special box in the North Hall containing the grand prize: a ten-pound solid milk chocolate pumpkin!”

The longer Mr. Chesterfield talked, the less interested Spooky was becoming. If the minions all had knives and were chasing the kids around, that would have been interesting.

“But be warned, children,” Mr. Chesterfield continued. “There are wondrous things to behold in my home, but there are also a few surprises. If you frighten easily, I beg you now to abandon this quest and wait for your friends in the safety of the North hall. Are you afraid?”

“No!” the children shouted in answer.

In concert, the minions collectively dashed down the stairs and into split into two groups, each disappearing into a different wing of the house. When the last was out of sight, the sound of a massive clock bonging the time rang out. When the ninth and final bong was heard, Mr. Chesterfield shouted, “Begin!”

Similar to when the pizza had been announced, the foyer emptied of children until only Spooky remained. Mr. Chesterfield noted the youth, then himself directed his electric wheelchair away from the top of the stairway and back into the shadows beyond the balcony as the motorized sound died away.

With all the other kids far ahead of him, Spooky leisurely began his self-guided tour. As Mr. Chesterfield had said, each area had a clue card on an easel with a picture of a numbered key. The clues all seemed pathetically easy and the minions who weren’t just standing beside their clue cards directing traffic were randomly jumping out for cheap scares.

What was worth it to Spooky was everything the other kids were missing: African tribal masks, wooden antique wheelchairs, pictures of turn-of-the-century locations, clocks of every size and shape, wind-up phonographs, and more. Every room was a separate museum filled with history, some of it creepy (the aforementioned trophy room filled stuffed creatures in scary poses) or really creepy (photos of the dead posed to look like they were sleeping, some even with their living siblings or other family members).

A few candy seekers would run by every once in a while, but otherwise Spooky was left alone to his own explorations, right up until he came upon three of Mr. Chesterfield’s minions blocking his way into one particular room, almost as if they’d been waiting for him.

“Hi guys! I’m guessing there’s a key nearby?” Spooky asked as he looked around. “I don’t see a clue card here.”

“You don’t seem interested in keys,” one of the minions replied.

Spooky grinned. “I’m not. I think the mansion is awesome.”

“Mr. Chesterfield has noticed your appreciation of his home and asks if you would like to meet with him.”

The three minions led Spooky in a non-threatening way (keeping in mind the eerie words of the butler-looking guy earlier) and through a secret passage to a hidden servant stairway.

“Are there a lot of these around here?” Spooky asked.

“Mr. Chesterfield will answer all of your questions.”

Spooky had plenty of them and really didn’t want to wait to ask, but he was quickly led to a hidden office in the attic. Everything inside looked frozen in time like a living black and white photograph, including Mr. Chesterfield in his wheelchair.

Able to see the mansion’s owner better, he seemed neither as ancient nor as incapable as he’d first assumed. Mr. Chesterfield wore a rimless hat and wire frame glasses that suited his gaunt face and wispy chin hair. He was dressed in a tan tweed jacket and wearing a dark red bow tie, looking like a creepy, retired children’s show host.

“I’m Mr. Chesterfield, but you may call me Bill,” he said to Spooky, putting his hand out to shake. “I understand that you’re Spencer, yes?”

Spooky smiled and took the old man’s hand. As he did so, one of the minions took a picture of Spooky with an instant camera he had seen in those old movies his dad liked to watch.

“My friends call me Spooky. What’s the picture for?”

Bill smiled. “That’s just a memento for my wall behind you. I call them my ‘forget me nots.’”

Spooky turned and looked. There were at least twenty pictures on the wall, some framed and some not, not all the same size and shape but with one consistent feature: they were all empty, as if whatever was in the picture had faded long ago.

“Why are they all blank?”

Bill rolled his eyes in that mocking way old people do when they don’t think kids understand something. “I remember each and every one of them. Every few years, I choose a child such as you for a special event, one that none of the others will experience. My favored minions and I sacrifice an innocent for wealth and power. When the ritual is concluded, the victim is obscured from reality, as if they had never been…”

“… which is why you’ve never been caught, right?”

Spooky chuckled. He couldn’t believe what he was hearing! Was this guy for real? “You’re really into Halloween, aren’t you?” Spooky asked.

“In ways you wouldn’t believe,” Bill answered. “That’s not a problem for you, is it, Spencer?”

“Nah. My mom was big into Halloween. Dad’s more into sci-fi. So, you have an altar around here someplace?”

Bill looked elated. “Yes! Down in the old cellar. We’ll take an elevator down just before midnight for the ritual.”

“Uh huh. And I guess you have a book of the dead or something?”

Unable to contain himself, Bill actually cackled. “Yes! Yes, I do! Exactly that! Here, take a look for yourself.”

Opening a old, tattered book on a table close by, Spooky was impressed by the workmanship. It genuinely looked like an old spell book of rites and stuff (at least movie quality or better). Bill turned a few pages for Spooky to see; while he couldn’t read it, it was beautifully illuminated with pictures of winged things and blood-red text.

Spooky nodded, then asked, “And I guess you want me to be your sacrifice for this year?”

Bill was overcome with glee. “My dear boy, I won’t accept no for an answer.”